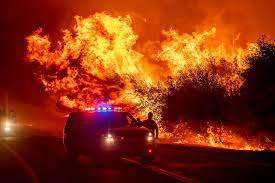 Western state officials are sounding an early alarm about a coming wildfire season that could be exacerbated by an ongoing drought, warning that conflagrations that were once confined to hot and dry summer months are both starting earlier and continuing later into the year.

Months before the worst of fire season begins, massive blazes have already devastated parts of the West.

More than 173,000 acres have already burned in New Mexico, a greater area of land than has burned over the entire year in most of the last decade. In December, a huge blaze destroyed hundreds of homes in neighborhoods between Denver and Boulder, Colo. Today, two fires are burning in national forests between Prescott and Flagstaff, Ariz.

The early burns come after a year of almost constant fire, from the Canadian border to the Mexican border, from the Pacific Ocean to the eastern slope of the Rocky Mountains. They are part of a decades-long trend of higher temperatures, drier atmospheres and, as a result, worsening disasters as the climate changes.

In many states, there is little relief in sight. California’s Department of Water Resources reported in April that the snowpack stood at just 38 percent of average, an indication that the record drought is on for another year. Recent rains across the West offered a temporary reprieve, but fire experts have warned that spring rains can have the perverse impact of spurring the growth of shrubs and grasses, which burn easily and spread fire more widely.

In Arizona, “as our temperatures begin to warm up, that grass crop is quickly dying out and any ignition source into that fuel bed can start a fast-moving wildfire,” said John Truett, Arizona’s fire management officer.

Across the West, the number of acres burned has risen precipitously in recent years. More than 10 million acres have burned in three of the past seven years, according to the National Interagency Fire Center, based in Boise.

For generations, America’s approach to wildfires has been about suppressing conflagrations after they begin, policies that have allowed buildup of combustible fuels, such as dead trees and undergrowth, on neglected forest floors. In some places, the drought has left those fuels drier than the average piece of paper, meaning they are more likely to burn, and to burn quickly, when they are exposed to lightning or human-caused fire.

In recent years, state governments have been trying to change that pattern, adding fire fighters and foresters, bolstering fuel cleanup efforts and reinforcing rural communities that extend into what fire experts call the urban-wildland interface, the nexus between combustible forests and human settlement.

“We are vastly improving our year-round fire response, expanding our arsenal of world-class firefighting tools, and continuing to activate every tool we have to help our communities prepare for and respond to the threat of wildfires and climate change,” Colorado Gov. Jared Polis (D) said last week.

“Temperatures are creeping back up — and that means Arizona faces a heightened risk of wildfires,” Gov. Doug Ducey (R) said in a statement last month. “At the state level, we’re going to do all we can to protect Arizonans and try to mitigate any lasting damage to our communities.”

States are getting new help from the federal government, after the bipartisan infrastructure law passed last year directed $3.3 billion to wildfire management projects. The bill included half a billion dollars for thinning projects and another half a billion for prescribed burns meant to limit the threat of fires that spin out of control.

For some states, the tools most critical to preventing small fires from growing out of control are new aircraft. Federal wildfire-battling fleets are already stretched to a breaking point during the worst of fire season, shuttling between major fires throughout the west based on which blazes are the most threatening.

In Washington, the fire-fighting fleet has grown from 15 aircraft to 35, including some surplus helicopters still studded with bullet holes from their service during the Vietnam War. Stationed at bases across the Cascade Mountains, those aircraft helped keep 94 percent of the fires that erupted last year to less than 10 acres.

Battling wildfires is made all the more complicated by the patchwork nature of America’s Western public lands. Much of the West is owned by the federal government — including 80 percent in Nevada, more than 60 percent of Utah, Idaho and Alaska, and more than 40 percent of California, Oregon and Wyoming.

Other shares are owned by the states, by tribal governments and by private landowners, creating an overlapping puzzle of responsibility that is not always clear in the heat of the moment.

When federal fire officials are occupied elsewhere, the onus to control fire on public lands often falls to state governments that are already overtaxed. Making matters worse, wildfires are treated differently under federal emergency management plans than are other types of natural disasters, potentially leaving states on the hook for defending federal land until Congress or an administration acts.

“Federal land are half our problem,” Washington’s Franz said. “If we are not helping them, we will not see a reduction in our catastrophic fires.”