CANCUN, Mexico–November 19th, 2020–Two of the largest tourism destinations in the Caribbean are now connected.

In a collaboration between Aeromar and Viajes Libero, non-stop flights are now operating between Cancun and 4 destinations in Cuba. It comes as no surprise as Cuba announced that they were fully reopening for tourism including the International Airport in Havana on November 15th.

“It is an important day for us as we have worked so hard to achieve this operation and new connection, joining two tourist poles of world importance,” said Rosanna Sangalli, director of Viajes Libero at a press conference.

The new flights give world travelers another reason to visit Cancun and the Mexican Riviera. Flight connectivity during the pandemic has been expensive and difficult as cancelled flights and reduced routes have paralyzed travel in many areas.

Both Mexico and Cuba are open for tourists from all countries under regular visa requirements. Now travelers can experience the best of two worlds. Once travelers explore the pristine beauty of Cancun and its surroundings, they can fly nonstop directly to Cuba which is another top tropical paradise with vibrant latin American culture that seems to be frozen in time.

All Aeromar flights to Cuba will include two food options and drinks. Aeromar is also carrying out health protocols including new air filters onboard, virtual check in, protective equipment for flight attendants, social distancing and extra sanitation and cleaning between each flight.

Aeromar’s fleet is the most modern in Mexico having only been in operation for three years. All flights to Cuba will be flown on ATR 72-600’s.

“The ATRs, in addition to being the safest, are friendly to the environment by emitting 50% less pollutants than other aircraft,” Rossello added.

Latin American tourism seems to be booming, with the Dominican Republic also ramping up arrival numbers, and evening opening a new resort this week, as reported by the SKNO.

Meanwhile the English-speaking islands are mostly mired in burdensome testing and quarantine requirements that will surely test the patience of would-be tourists.

Someone forgot to send the memo to Cancun that the tourism industry is supposed to be in shambles.

Since being the first destination to reopen in the world back in June, the city has pushed flight connectivity as a top priority.

On November 6th and 7th, the Cancun International airport set new records once again with over 300 arrivals each day.

With non-stop flights from every major city in Canada, the United States and now select cities in Europe, there is no stopping Cancun’s growth. The lure of easy entry requirements including no testing or quarantines along with direct flights has made the destination a magnet for tourists.

Since reopening in June until the end of October, Cancun has already seen 3.48 million passengers at the airport. 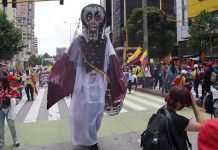