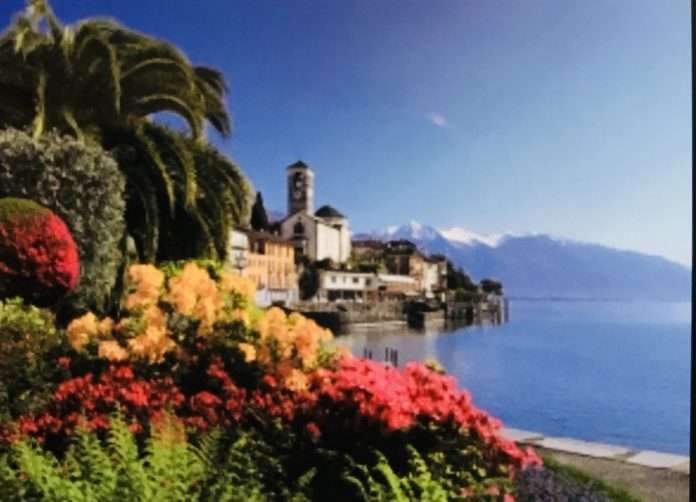 Sandwiched between Italy’s northern borders and the mountainous Swiss region of Graubunden, the Kanton (district) of Ticino is unlike any other part of Switzerland.  For one, it’s the only area in the country where Italian is used as a common language by the vast majority of its inhabitants. It also has its own unique climate and is often referred to as the Mediterranean in the Alps. In fact, Ticino has more sunny days per year than anywhere else in Switzerland. So much so that many visitors from the country’s German-speaking areas even have a special name for it: sonnenstube, which translates to sun porch. So it’s no surprise that Ticino is the chosen destination for hundreds of thousands of visitors, both Swiss and international, as well as some of the world’s wealthy elite, many of whom have luxurious second homes overlooking the crystal-clear lakes of Maggiore and Lugano. And there’s no shortage of four and five star luxury hotels, as well as restaurants. The area is also renowned for its UNESCO World Heritage sites which include spectacular medieval castles and defensive fortifications in Bellinzona, the Kanton’s capital. And that’s without mentioning Morcote, voted as one of the ten most beautiful villages  in Switzerland.
But Ticino wasn’t always as busy and prosperous as it is today. In fact, until the opening of the Gotthard Railway in 1882, which finally enabled tourists from the country’s north to cross the Alps with relative ease, Ticino was the poorest region in Switzerland. Its mainstay was farming and fishing. However, this wasn’t enough to support its population, many of whom relocated to Italy, with some families even moving as far away as Australia. The real breakthrough (literally) was the completion in 1980 of the Gotthard road tunnel which finally enabled travelers from Northern Europe to access Ticino by car or bus.
According to historical records, Ticino was originally settled by the Lepontii, a Celtic tribe, and was part of the Roman Empire. Switzerland itself came into existence in 1291 as an alliance of small Kantons. Over the following centuries, it was joined by other regions which, together, became part of today’s Swiss Confederation. In the late 15th century, Ticino was the last to break away from its Roman masters and join, but only  after suffering through hundreds of years of feuding and warfare between the Lords of Como and the Dukes of Milan over its territory. Even after gaining its independence from its southern neighbour, life in Ticino was still difficult. Many of its isolated settlements had no electricity until the early 1900’s. Essential food, like meat and cheese, as well as locally produced wine, had to be stored inside grottos and caves, where temperatures were cooler. (The same grottos now serve as popular restaurants and snack bars catering to both locals and tourists).
Today, Ticino’s troubled past is hard to imagine. The city of Lugano is the third largest financial center in Switzerland, after Zürich and Geneva. One of its main thoroughfares, Via Nassa, is known as the Fashion Valley due to the abundance  of luxury stores, which include world renowned brands like Hugo Boss, Gucci, Louis Vuitton, the VF Corporation, and many others. Lugano is also home to one of the world’s largest gold refineries, whose specialty is the manufacturing of gold bars which end up in banks and private institutions from New York to Beijing. There’s also an annual Film Festival in Lugano, as well as the Moon and Stars live musical event in nearby Locarno featuring international stars like James Blunt and Lionel Ritchie.
And when it comes to accommodations, there’s something for everyone, from five star hotels to Air B&Bs.
Nor has the beauty of nature been overlooked. Nearby, on the islands of Brissago on Lake Maggiore, you’ll find a spectacular botanical garden with over 1,600 different plant species from five continents. And it’s easily accessible by lake cruiser, chartered yacht, or rented sailboat or dinghy.  For hikers, there are dozens of trails, all offering spectacular views of lakes, forests, and snow-capped mountains. All in a single glance.
And palm trees? Plenty of those.
Sorry, no Caribbean coconuts. At least, not yet. But, with global warming, we may see them soon.
- Advertisement -