LONDON, England–November 18th, 2020–Courts in London have ruled on the historic question Why Can’t A Woman Be More Like A Man, which was eloquently expressed by Rex Harrison in the Acadamy Award-winning 1960’s movie My Fair Lady, in which he starred with Audrey Hepburn.

The question, which sounds like the first line of a riddle has been faced by judges in the UK’s High Court, Appeals Court, and now this week in the UK’s Supreme Court, in a case brought by transgender parent Freddy McConnell.

McConnell was born female and raised as a girl, but later began to identify as a man. In 2013, McConnell began the process of medical transition, first taking hormone therapy and, the following year, undergoing a double mastectomy.

At this point, McConnell decided to pause transition and – still having her ovaries and uterus intact – became pregnant (presumably as a result of having sex with a man, not with herself.)

Biology might have been on McConnell’s side, but the court ruled that the law was not.

Legally, if you are pregnant and give birth, said the court, then it turns out that you are a mother. Even if you claim to be a man. Of course, in private, your friends, family, and children can call you anything they like. And families come in all shapes and sizes, with foster mothers, stepmothers, and adopted mothers.

However, much to McConnell’s consternation, a birth certificate legally records the key facts of a child’s birth – including the name of their mother – irrespective of the wishes, feelings, or identities of all concerned.

Since giving birth in 2018, McConnell has campaigned tirelessly to have this overturned and to be recorded as ‘father’ or simply ‘parent’ – anything, in fact, other than ‘mother’.

But, in September 2019, the High Court ruled that McConnell must be recorded as the child’s mother. Both the Appeal Court and now the Supreme Court have confirmed this judgment.

It is good to see that common sense has prevailed. A birth certificate is not meant to be an esteem-boosting, identity-affirming statement for parents, but a public record of facts.

A birth certificate records who was born, when, and where, and who gave birth – not what the participants wanted to have happened. This legal document is important for historical record. It provides a reference for the child in years to come, although this point seems easily forgotten amid concern for the feelings of parents in the present.

The Guardian, writing about Freddy McConnell, helpfully explains: “He retained his female reproductive system. He gave birth after suspending his hormone treatment and allowing his menstrual cycle to restart.”

But any 10-year-old fresh out of a science class, or sex and relationships education, knows this is nonsense. Men do not have a female reproductive system, they do not have a menstrual cycle, and they do not give birth. Pretending they do is indulging a fantasy.

The McConnell case is one of the few examples in which a major social change has been subject to legal scrutiny, and the case has been settled in favor of women. Yet many other changes that impact on women and girls have been implemented in the name of trans rights without any public or legal consultation.

Freddy McConnell seems intent on pursuing this matter still further and it looks like the next stop will be the European Court of Human Rights, but curious minds will want to know the answer to another question: Who is the real father? And what was he thinking? 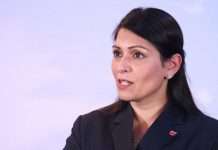