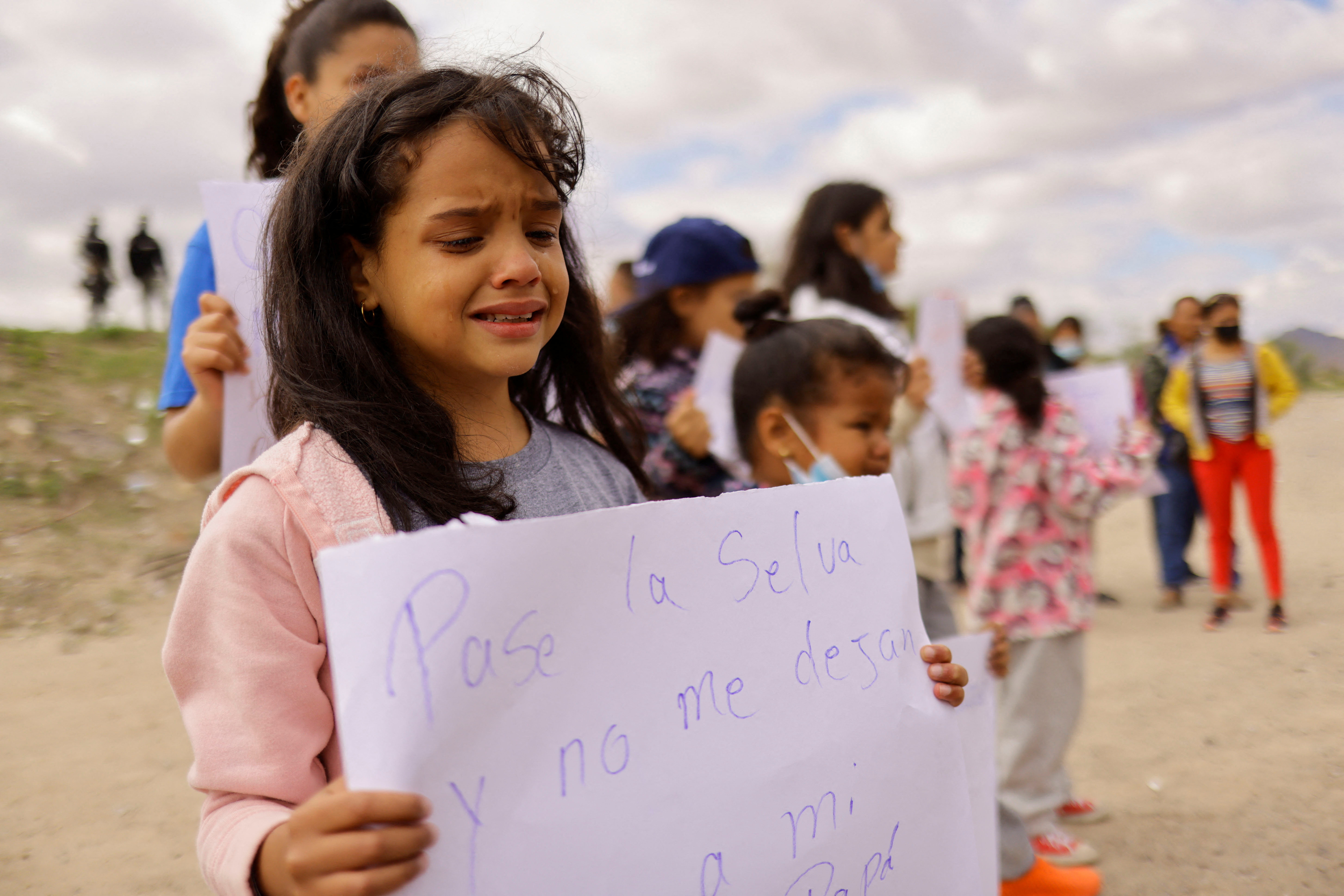 Maria Victoria, 8, cries because she wants to see her father who is in the United States, during a protest on the banks of the Rio Bravo river, after Venezuelan migrants were expelled from the U.S. with their families and sent back to Mexico under Title 42, in Ciudad Juarez, Mexico October 18, 2022. REUTERS/Jose Luis Gonzalez

Oct 18 (Reuters) – U.S. and Mexican authorities recently announced a new policy that would expel Venezuelans entering the U.S. land border back to Mexico, but allow up to 24,000 people from the country to apply for humanitarian entry into the United States by air.

As a result of the new policy, thousands of Venezuelans believed to be en route to the United States are now stranded between the two countries during a year when Venezuelans are arriving at the U.S. border in record numbers.

WHY WERE THE NEW MEASURES PUT IN PLACE?

The measures respond in part to political pressure on U.S. President Joe Biden to curb record numbers of illegal crossings at the Mexico-U.S. border. Venezuelans have been one of the largest groups of migrants involved in such crossings, in part because Washington granted temporary protection status last year to those who were on U.S. soil. Deporting Venezuelans is also more complicated than with migrants of other nationalities because the two countries broke diplomatic relations in 2019, making it difficult to organize deportation flights.

More than 150,000 Venezuelans were apprehended at the U.S.-Mexico border between October 2021 and August 2022, compared with nearly 48,000 in fiscal-year 2021, according to U.S. government data. In September, over 33,000 Venezuelan individuals were encountered at the U.S.-Mexico border – more than the number of unique crossers from Mexico and more than immigrants from Guatemala, El Salvador and Honduras combined, according to U.S. government data.

WHAT HAPPENS NOW TO VENEZUELANS IN TRANSIT TO THE UNITED STATES?

Those in transit may attempt to reach the United States despite the near certainty that they will be sent back to Mexico. Mexican authorities so far have given many of these individuals a deadline of no more than two weeks to leave the country. It is unclear where Venezuelans waiting in Mexico will stay, as Mexico’s migrant shelter system is often overwhelmed.

Some may return to Venezuela, while others could settle down in different Latin American countries, where Venezuelan migrants have in some cases faced discrimination, limited job opportunities and restrictions on their migratory status.

Half of the Venezuelan refugee and migrant population across Latin America and the Caribbean cannot afford three meals a day and lacks access to housing, according to the International Organization for Migration (IOM), forcing many to resort to sex work or begging.

WHO CAN APPLY FOR THE NEW U.S. PROGRAM?

Venezuelans who meet the U.S. requirements may apply for the recently announced U.S. program. Among the requirements is having a U.S.-based supporter and holding a valid passport. The cost of a passport in Venezuela is $200, nearly ten times the country’s minimum wage.

Only 1% of 1,591 migrants who left Venezuela between June and August held a passport, according to the Observatory of Social Investigations, a rights group.

WHAT TRIGGERED THE VENEZUELAN EXODUS?

Under late President Hugo Chavez, who died in 2013, the country with the world’s largest oil reserves weathered corruption and inflation.

In 2018, inflation in Venezuela exceeded 1 million percent. Medicines for conditions from headaches to cancer were unavailable.

WHY ARE VENEZUELANS STILL MIGRATING?

Despite some improvements following a 2019 opening of the economy that included an informal dollarization, most Venezuelans still struggle to afford basic goods and services. Efforts by the government of Chavez’s successor, Nicolas Maduro, to ease economic restrictions have alleviated shortages and fueled consumption in high-income brackets, but left the vast majority of the population making wages that fall well short of the cost of living.

The monthly minimum wage in the OPEC-member nation is around $15 while the price of a basket of goods covering the monthly needs of a family of five was around $370 at the end of September, according to the nongovernmental Venezuelan Finance Observatory.

Even in the commerce and services sector of relatively wealthy Caracas, employees make an average of only around $130 a month. Meanwhile in the public sector, which employs some 2.2 million, the average monthly salary is about $20 to $30.

Economists say at least 30% of the population has not benefited from the new economic measures.

Remittances to Venezuelans from relatives in the United States or elsewhere help but are insufficient for most. Just one-fourth of Venezuelan families receive remittances, averaging only $70 a month, according to Caracas-based consultancy Anova.