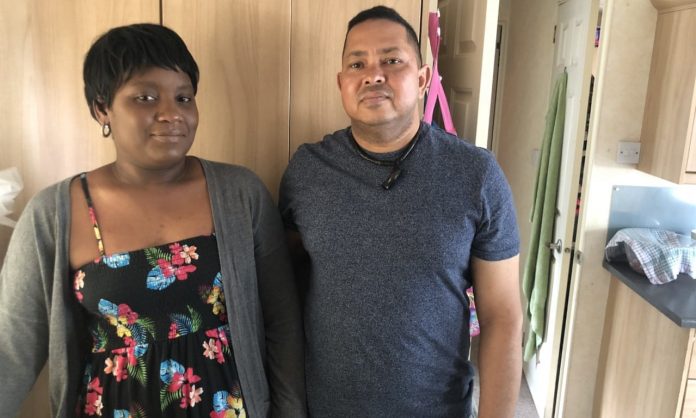 Lindy and Jonathan D’Offay are forced to live in a static caravan. They say a council officer told them to ‘go back to the Seychelles’. Photograph: Katie McQue

Similar to the recent Windrush Scandal British passport holders from the Chagos Islands in the Indian Ocean are being systematically targeted in an attempt to have them removed from the UK, the UK Observer newspaper can reveal. What makes this even more cruel is that they were forcibly evicted from their native land by the British.


The revelations expose a fresh dimension of the UK’s hostile environment, showing that the strategy also persecutes passport-holding British citizens of colour.

A series of interviews corroborated by internal government emails reveal that the sizable community of British Chagossians in Crawley, West Sussex, have faced a lengthy campaign putting pressure on them to leave the country. They say they have felt intimidated by hostile officials.

British Chagossians say the local council offered to pay for flights to the Indian Ocean rather than provide them with housing assistance in the UK, which is potentially unlawful. Others allege that council officials aggressively told British passport holders seeking housing assistance that they should return to the Seychelles or Mauritius.

Satbir Singh, chief executive of the Joint Council for the Welfare of Immigrants, said: “This is another shameful reminder that the hostile environment is regularly weaponised against people of colour, and must be scrapped to ensure all Chagossians have a right to stay and a scandal like this is never repeated.”

Clare Collier, advocacy director for the human rights group Liberty, said: “The apparent targeting of British Chagossians is deeply worrying, potentially discriminatory, and symptomatic of the mission creep of the government’s hostile environment.”

One British Chagossian described the approach of Crawley borough council as “racist” and said many had been affected. The saga began in the late 1960s and early 70s when the 2,000-strong population of the Chagos Islands was forcibly removed by Britain to allow the US military to establish a strategic air base on the largest island, Diego Garcia.

Islanders were exiled in Mauritius and the Seychelles, 2,000km away, and in 2002 native Chagossians and their children were given the right to British passports. Since then more than 3,000 have emigrated to the UK, the majority settling in Crawley.

Among them was Marie, 40, who moved to Crawley from the Seychelles eight years ago with her infant son. When she approached the council for help with social housing she said she was told they would only pay for plane tickets to return to the Seychelles.

“When [the housing officer] spoke to me he was angry. He said he didn’t like the Chagossians coming to the UK and asking for houses. He asked me why I came. I was asked if I wanted a plane ticket to go back. I said no, I have nowhere to go,” said Marie, whose name has been changed.

The government is acutely aware of the sensitivities surrounding the issue. Internal emails, obtained under freedom of information laws, show the Foreign Office recognises that parallels could be drawn with the Windrush scandal.

They also reveal that Foreign Office officials believed Amber Rudd, who was forced to step down as home secretary over Windrush, gave the Chagossian issue “the brush-off”.

Others interviewed by the Observer include Jonathan D’Offay, 50, a British passport holder who was just four years old when he was evicted from his home on the Chagos Islands by the British military. His mother and siblings were displaced to Mauritius while he was sent to the Seychelles with his father, who later died.

Last year he moved to the UK with his wife, Lindy, and nine-year-old daughter to make a fresh start. He settled in Crawley and after finding a job applied for housing assistance from the council because private rentals, with hefty deposits, were not affordable on his salary.

He said he felt so ashamed that he considered leaving the UK. Now the family lives in a poorly insulated static caravan that gets extremely cold during the winter.

A social services report confirms the treatment of British Chagossians, stating “exploration needs to be had to assist the family returning to the Seychelles”.

The council also appears to have routinely categorised British Chagossians as “intentionally homeless”, increasing the pressure for many to leave the country. This, the council argues, is because they moved to the UK of their own accord and should return to the Seychelles and Mauritius.

The fact that they are prohibited by the UK from returning to their homeland is not acknowledged during the housing application process, several Chagossians have said.

Responses to freedom of information requests show Crawley borough council categorised 23 Chagossians with British passports as intentionally homeless between April 2015 and February this year; 22 of these cases included families with children under 18. There were three such cases in the first two months of 2019.

Bernadette Dugasse, 62, who came to the UK from the Seychelles 10 years ago and has repeatedly applied for council housing, said: “Some [housing officers] are aggressive. They asked why I can’t go back. Every time I mentioned we came from Diego Garcia, she said: ‘Excuse me, do you think because you were born on Diego Garcia you were born with a golden spoon in your hand?’”

A British Chagossian in her 40s who gave her name as Maita, moved to the UK five years ago with her two children and elderly mother. When she asked the council for assistance with housing, she felt pressured to leave the UK.

“He [the housing officer] said, ‘why did you come here?’ I told him the British government stole my mum’s country,” she said. “He said, ‘why did you make yourself intentionally homeless? Why don’t you go back?’ A lot of Chagossians got this from people from the council. A lot.”

Chagossians living in the Seychelles and Mauritius say they are subject to xenophobia and denied education and employment opportunities.

UK government officials with knowledge of the Chagossian issue closely monitored the Windrush press coverage. “All over Windrush and the potential parallels that may be drawn with the Chagossian situation,” stated an email sent within the Foreign Office overseas territories department. Another confirmed the Foreign Office was aware that Chagossians were widely categorised as “intentionally homeless” and denied council housing.

On one occasion the Foreign Office even intervened to limit press coverage of the issue. During a meeting with the Chagossian community on 9 May last year, the broadcasters CNN and Al Jazeera were asked not to film by a Foreign Office press officer.

A Foreign Office spokesman denied this, saying: “Journalists were invited to stay and listen to the event, they were simply asked not to film as it was a meeting chaired by civil servants, rather than ministers. They were able to interview attendees, and they did film outside the meeting.”

A spokesperson for Crawley borough council said: “We refute allegations that our staff are aggressive or suggest that people should ‘go back’. These statements do not represent the council’s values.

“We endeavour to deliver the highest standards and these allegations do not reflect the caring nature of our staff who have to make difficult decisions in line with the law and our policies. We are satisfied that all functions and duties that the council undertakes towards all customers are carried out in accordance with the relevant legislation and public sector equality duties.”

A Foreign Office spokesman said £40m had been made available to support Chagossians.

Britain took control of the Chagos archipelago in 1814 and in 1965 separated the territory from Mauritius, which was a British colony until 1968.

The UK then forcibly evicted Chagossians to Mauritius and the Seychelles to make way for a US military base. The UK has since apologised for the way the evictions were conducted.

In February the International Court of Justice ruled that the UK’s sovereignty over the land should end “as rapidly as possible”. The United Nations recently voted for Britain to give up the islands.