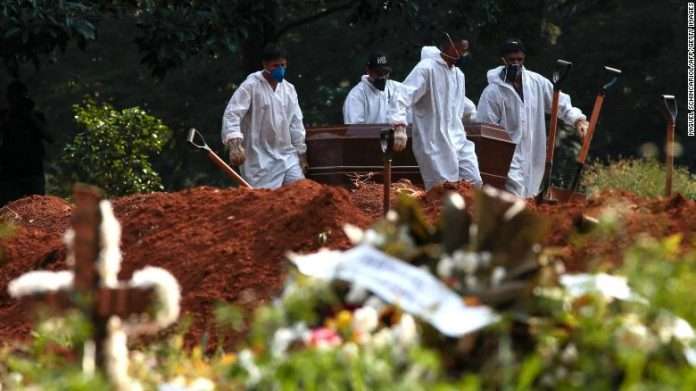 (CNN) More than year into the global pandemic, Brazil’s government has decided to form a new Covid-19 crisis committee that will now include state officials.

Brazilian President Jair Bolsonaro made the announcement on Wednesday, a day after he promised the nation that 2021 would be “the year of vaccination” for Brazilians.

Brazil is currently gripped by a devastating new surge in cases, with a record-breaking 3,251 new deaths from Covid-19 on Tuesday — the most deaths the country has ever seen in a single day. Hospitals’ intensive care units across the country are overstretched, and some states have warned they’re running out of medicines necessary to intubate severe cases.

Bolsonaro, who was fiercely criticized for downplaying the gravity of the panemic, has hinted at a potential shift in attitude. On Tuesday, hours after his newly appointed health minister Marcelo Queiroga was sworn in, Bolsonaro emphasized in a public address that “mass vaccination” would be a priority — after previously dismissing the urgency of inoculation and even attacking some vaccines.

Following a year of often acrimonious relations and blame between federal and local governments, the new committee will include members of the legislative branch, the Supreme Court, ministers, and six state governors. The federal government did not respond to questions about whether the new committee would replace a similar group composed only of federal-level officials.

Still, not everyone gets a say. State governors who’ve been political opponents of Bolsonaro, like Sao Paulo governor Joao Doria, have been left out of the committee. On Thursday, Brazil’s national association of mayors also wrote a letter to President Jair Bolsonaro asking to be included.

The new committee will meet every week to decide the next steps in dealing with the Covid-19 pandemic, the President said on Wednesday.

States are running low on supplies

Bolsonaro, an outspoken opponent of restrictions on economic activity, has repeatedly clashed with state authorities on how to manage Covid-19 outbreaks.

This week, the country’s Supreme Court struck down the President’s request to block three state governors from imposing restrictive lockdown measures in their states.

Supreme Court Justice, Marco Aurélio Mello underlined the autonomy governors and mayors have to manage the health crises in their jurisdictions, saying Tuesday that a “totalitarian vision” is not appropriate in a democracy like Brazil and that the president is responsible for “the larger leadership, the coordination of efforts aimed at the well-being of Brazilians.”

Meanwhile, public and private health systems in states across the country are straining to accommodate rising Covid-19 case numbers.

On Thursday, the Brazilian Association of Private Hospitals in Brazil warned that stocks of anesthetics used in Covid-19 treatment would only last for “three to four days” in private hospitals. Earlier in the week, a statement posted on the Brazilian Attorney General’s website said that six states in Brazil were running critically low on medical oxygen.

General Ridauto Fernandes, logistics director of the Ministry of Health, has said that negotiations are underway to increase the production of oxygen supplies and to install oxygen concentrators — equipment that draws and concetrates oxygen from the air — in different parts of the country.

Many recent cases have been attributed to the P.1 variant of the coronavirus, first identified in Brazil’s own Amazonas state. A March 4 study from Brazil’s Oswaldo Cruz Foundation — also known as the Fiocruz institute — estimated that coronavirus variants make up more than half of all cases in six out of eight states it studied.

According to the Pan American Health Organization (PAHO), the same variant has now been identified in 15 countries and territories in South America, North America and the Caribbean.

In a press conference Tuesday, PAHO Director Carissa Etienne highlighted the dangerous potential spread of the virus from Brazil. “Unfortunately, the dire situation in Brazil is also effecting neighboring countries. Cases have risen in Venezuela, particularly in the states of Bolivar and Amazonas which border Brazil,” she said.

In Uruguay, where cases are also spiking, health officials said this week that they also had detected the P.1 variant.