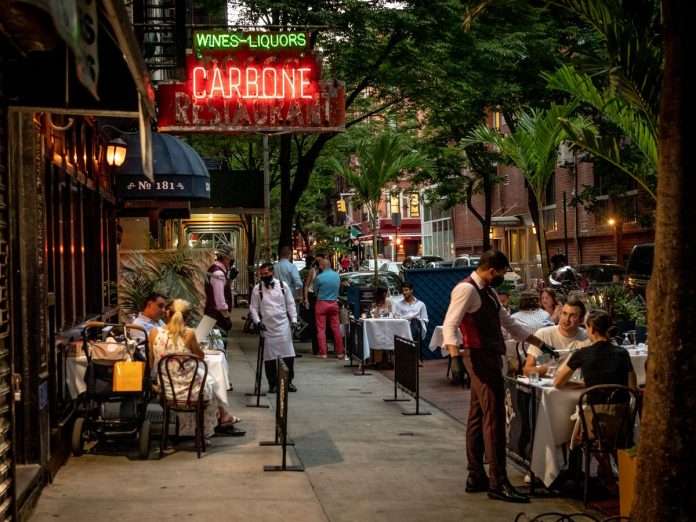 New federal guidelines released Monday saying it is safe for fully vaccinated people to gather indoors with each other without masks is adding hope that a return to normality — or something close to it — might be getting closer as the nation hits one year in a locked-down state.

No one knows exactly when it will be normal again — if ever, given how the coronavirus pandemic has elevated concerns about contagious diseases in general.

There’s also quite a bit of uncertainty going forward, especially as variants of the virus continue to circulate.

Still, experts are more optimistic than they have been since the pandemic began, as political leaders plot a path forward, movie theaters in New York reopen and the Chicago Cubs prepare to welcome fans to Wrigley Field for Opening Day — albeit at a 20 percent capacity.

“I think we’re on a trajectory to be in really good shape this summer, certainly in the July time frame,” said Eric Topol, professor of molecular medicine at Scripps Research.

The key to normality is getting people vaccinated, and different time frames have been projected.

Even with a vaccination, people are being urged to take care.

While experts say vaccination likely significantly reduces transmission of the virus, it also likely does not entirely eliminate it, meaning that vaccinated people should still take some precautions when around unvaccinated people.

Walensky said the guidance will be updated once a larger share of the population is vaccinated, and as more data becomes available on vaccinated people’s ability to spread the virus.

“Today’s action represents an important first step; it is not our final destination,” she said. “As more people get vaccinated, levels of COVID-19 infection decline in communities, and as our understanding of COVID immunity improves, we look forward to updating these recommendations to the public.”

The need for vaccinated people to wear masks and distancing in public won’t last forever.

“The pivot point will be after everyone has had a chance to be vaccinated,” said Robert Wachter, chairman of the department of medicine at the University of California-San Francisco.

In a couple of months, once everyone has had a chance to be vaccinated, “at that point [unvaccinated people] are choosing to put themselves at risk,” he said. “I become a little bit less concerned about being super careful.”

Still, the virus is not likely to be totally eliminated anytime soon. A more realistic goal, experts say, is to reduce its danger such that it blends into the background rather than dominating daily life as it has for the past year.

The virus will still spread among people who choose not to be vaccinated, and even among vaccinated people, there can still be occasional mild cases.

The key advantage of the vaccines is that so far they are extremely effective at preventing hospitalizations and deaths, helping take the teeth out of any smaller resurgences of the virus down the line, such as next fall when the weather gets colder.

“The virus isn’t going to go away,” said Michael Mina, an epidemiologist at the Harvard T.H. Chan School of Public Health. “But it will begin to do less and less damage, because people are going to be immune, so even if they get sick they’re not going to die, for example. Even if they get infected, they won’t end up in the hospital.”

While vaccine hesitancy is a setback for achieving societywide protection, the flip side is it can make vaccines available sooner for people who do want them.

“The president talked about May being a timeline when there’s going to be enough doses for every American,” Gottlieb said on CNBC last week. “I don’t think we’re going to get every American vaccinated, unfortunately, so I think as you get into the end of March, into April, supply is going to start to outstrip demand and they’re going to open up appointments. So we have about another month to go.”

The major question mark over the long-term defanging of the virus is what the trajectory of the variants is.

A variant first identified in South Africa has shown some ability to reduce the effectiveness of vaccines, though data so far indicates the vaccines would still protect against severe cases, the most important factor.

If that variant becomes more prevalent in the United States, it could complicate the situation to some degree. More ominously, a new variant could develop that is more resistant to the vaccines.

“My concern is that we might have only seen the beginning of what these mutations are capable of,” Mina said. “Will we see in the next six months a new suite of mutations that build off of the current ones that really do do greater damage to our immune system’s ability to recognize the virus? That’s what I’m concerned about. I sure hope it doesn’t happen.”

The vaccines can be updated to address new variants, and Pfizer and Moderna have both started work on that process in case it is needed.

Topol said the virus could still circulate to some degree for “many years, potentially,” but “I’m hoping it is at a really low level and basically we almost eliminate the deaths and severe illness.”

“I just can’t imagine it would ever be as horrific,” he added. “I’m very optimistic.”

The variants first identified in South Africa and Brazil could be less of a concern for the U.S., Topol said, because they will be “outrun” by yet another variant, first identified in the United Kingdom, which is more infectious and therefore will spread faster.

Luckily, the U.K. variant responds very well to the vaccines. But it poses a danger of a new spike in the short term before vaccinations are widespread enough to fully counter it.

That is in part why experts are urging states to maintain restrictions like mask mandates and restaurant limits for a few more weeks, until there are enough vaccinations to prevent the U.K. variant from really taking off.

“We have one big hurdle, one mega-hurdle, and if we get through that, we really are going to be in good shape,” Topol said.