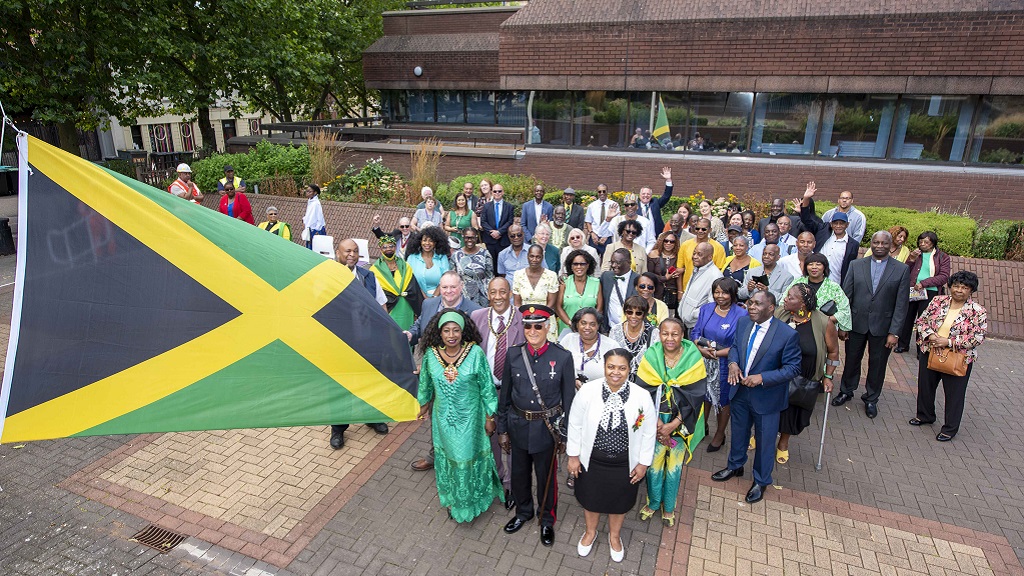 Jamaica-born Mayor of Wolverhampton, United Kingdom (UK), Councillor Sandra Samuels (left), holds a Jamaican flag at a civic function to mark Jamaica’s 60th Independence anniversary on August 6, 2022, at the African Caribbean Centre (The Hub) in Wolverhampton. Other officials and Jamaicans participated in the event.

Loop News- Jamaica-born Sandra Samuels, the first black person to become mayor of Wolverhampton in the United Kingdom (UK), is proudly carrying the flag of her native country.

Having served in the medical field as a nurse for 40 years, Councillor Samuels saw, first-hand, the gap in political representation for minorities and entered the political arena in 1998. She was elected a councillor in 2004.

The mayor was born on Orange Street in Montego Bay, St James, and emigrated to England at age 10.

In a recent interview with JIS News, she shared that while she fully appreciates all that she has accomplished in British society, “I see myself firstly as a Jamaican.”

The mayor said that at every opportunity, she arranges with officials at the Jamaican High Commission in London, to celebrate Jamaica, especially on Independence Day (August 6).

“I have Jamaican parents; I eat Jamaican food,” she noted, adding that at the African Caribbean Centre (The Hub), a civic centre located in the city, its establishment which she spearheaded, “the biggest Jamaican flag is inside there”.

“There is a Jamaican in office as mayor, so it is important that we celebrate. You can take the girl out of Jamaica, but you can’t take Jamaica out of the girl,” the mayor quipped.

She expressed her love for the UK, as “it has given me a good life, but Jamaica is my country of birth, and I want Jamaicans to do well, so we do what we can to help,  promote and support”.

The mayor is urging parents of young children from Jamaica, and other countries, who seek to reside in the UK, to ensure that they have constant and protective support, and to be committed to education, as many youngsters have been sidetracked in British society.

Before political office, the mayor served in the theatre movement, school governance, and was a community activist and volunteer.

She said her greatest joy is to give her time and support to the underserved and causes for humanity.

Samuels, who is the 163rd mayor of Wolverhampton, has themed her tenure ‘Dare to Dream’.

She shares that her family, her husband Karl, who is from the parish of Hanover, and friends have been a big motivation for her time in public life, but the greatest inspiration to serve comes from tangible benefits to the people and communities that she represents.

“In order for us to make a difference, we have to be involved in decision-making, so I want to see far more black people elected to office, and I see my role as to support and elevate others,” the mayor emphasised.
Samuels said her big dream is to inspire others from under-represented groups to believe in themselves and make great strides in their chosen fields.

She stressed that persons from Caribbean and African backgrounds must always be represented at the “top of the table”, and as someone who has worked hard to mentor youngsters and open pathways for the underrepresented, she wants to see people who look like her empowered and motivated to assume and be elected to any office in her city.

“I work hard to make a difference to people’s lives, and to make sure that a ladder to improve people’s situations is available, so that when I go, there is someone who looks like me coming up on that ladder, to replace me,” the mayor said.

Samuels attended senior school in Bushbury, at Northicote, before going on to Wulfrun College, now Wolverhampton College, and then to university to do nursing.

In 2015, she was awarded the Order of the British Empire by the late Queen Elizabeth II, for services to local government and politics.