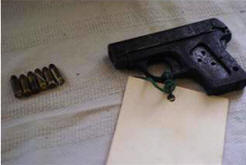 (Upper Monkey Hill) – Once again, France has been overpowered. This time it wasn’t the armed might of Germany that triumphed, but a woman who didn’t take kindly to a man entering her home with a gun.

According to a release from the Royal St. Kitts-Nevis Police, authorities responded to a report at Upper Monkey Hill on Monday, June 30, at about 5:30 am.

Investigations reveal that Denzil France unlawfully entered the home of a young woman who confronted him and relieved him of the firearm he was carrying.

She called for assistance from her mother and both women bound his hands with rope and called the police.