Basseterre, St. Kitts – The recovery efforts by the government of St. Kitts and Nevis to return the country back to normalcy after it was damaged by hurricanes Irma and Maria in September 2017 have begun as reconstruction that commenced on a number of sectors is progressing smoothly, said Prime Minister the Honourable Dr. Timothy Harris.

Prime Minister Harris echoed delight at the significant works that have already been initiated with respect to the federation’s recovery efforts. He reported on the security and education sectors during a press conference on Nov. 29. Harris informed on the police station housed on the ground floor of the Frigate Bay Development Corporation, noting that damage to the structure has led to the displacement of the police from that particular out-post.

“Given the importance of safety and security in our major touristic hub, this government is undertaking the cost of repairs to that facility,” he said. “The Public Works Department has, in fact, already awarded a contract to effect the necessary works. The cost of these repairs has been put at about EC$350,000. Additional costs for furniture and fittings and electricals destroyed by the battering of wind and rain have not yet been fully determined.”

He said that a private sector partner has committed to assist the police in their “retrofitting exercise once the roof is solidly and securely on” and he thanked the private partner for willingly assisting in this effort. Prime Minister Harris also expressed thanks to another private party for loaning its facility, which will temporarily house the police at Frigate Bay.

The Police Training School also suffered damage to the tune of about EC$232,611. The prime minister said that because of the priority given to security and public safety, a contractor has been assigned by the Public Works Department.

Equally important is the assistance given to the Ministry of Education, which also suffered significant damage.

“So far, the Ministry of Finance…has committed EC$1.2 million for post hurricane repairs in our educational institutions from Early Childhood to Secondary School,” Harris said. “The most significant cost is at the Washington Archibald High School, where over half a million dollars in repair works are being undertaken. Indeed, this cost would have been higher to the public purse had not the Public Works Department undertaken to do that. We also committed to repairs to the roof, ceiling and the electrical network at the school. Funds have also been committed to the repair efforts at our institutions of learning in Dieppe Bay and Saddlers among others.”

The agriculture and fisheries sectors also received assistance to which Prime Minister Harris said that there has been significant progress thus far. More than EC$300,000 was allocated to assist with damages to the sectors, as well as to help farmers and fishers to fully recover. 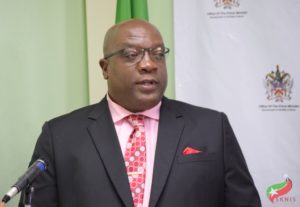