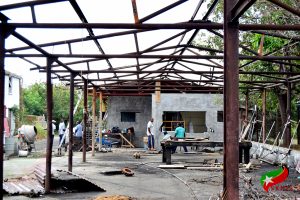 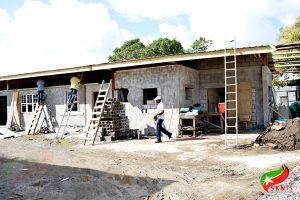 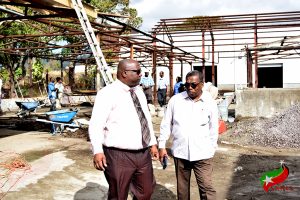 The work at the SSMC compound, which is expected to be completed by the end of April, will pave the way for the start of construction on a modern East Line Bus Terminal at Wellington Road in May of this year.

On April 5, Prime Minister the Honourable Dr. Timothy Harris was given a tour of the construction area at SSMC by Minister responsible for Public Infrastructure and Transport the Hon. Ian Patches Liburd. Also on hand were the Director of Public Works Department Cromwell Williams, as well as representatives from ADeB Consultants Limited, including Managing Director Martell Lee.

As it now stands, omnibus operators who ply their trade along the east side of the country utilize both Branch Street and Johnson Street to pick up and drop off passengers. Minister Liburd said during the years this has created congestion and noise problems for families residing in the area.

“In addition to that, those who commute between Saddlers and Basseterre on the East Bus Line have to wait on Wellington Road to catch a bus – exposed to the weather: the sunshine, rain; and in addition to that, exposed to danger in terms of the traffic,” Liburd said. “So we thought we would put people first and we would build a brand new bus terminal where the existing Vehicle Maintenance Division is.”

After a tour of the facility, Prime Minister Harris expressed his delight in witnessing rehabilitation work taking place at the former SSMC compound, which is in a serious state of dilapidation after years of neglect. “It pleases me, as someone whose father worked in the industry, as someone whose mother worked in the industry, to come to see that at long last something beautiful is being built on this site that will benefit all the people of St. Kitts and Nevis,” Prime Minister Harris said. “Three beautiful structures will emerge from the dilapidation [that] was our inheritance.”

The prime minister further noted that the relocation of the PWD and the subsequent construction of a modern bus terminal on Wellington Road is another example of the Team Unity government fulfilling its promises to the people.

“All of these projects that we are embarking upon really are about people: adding to the comfort of the workers, which is critically important, but also putting the country in a better place to deliver the services with less hassle,” Harris said. “The coming of the new bus terminal, which would be an improved bus terminal, will facilitate the easier movement, not just of motor vehicles, but pedestrians also in and out of Basseterre.”

It is expected that substantial work on the East Line Bus Terminal will be completed by September of this year. The new terminal will include toilet facilities as part of Phase I, while the second phase will see the addition of ancillary areas such as shops and restaurants.