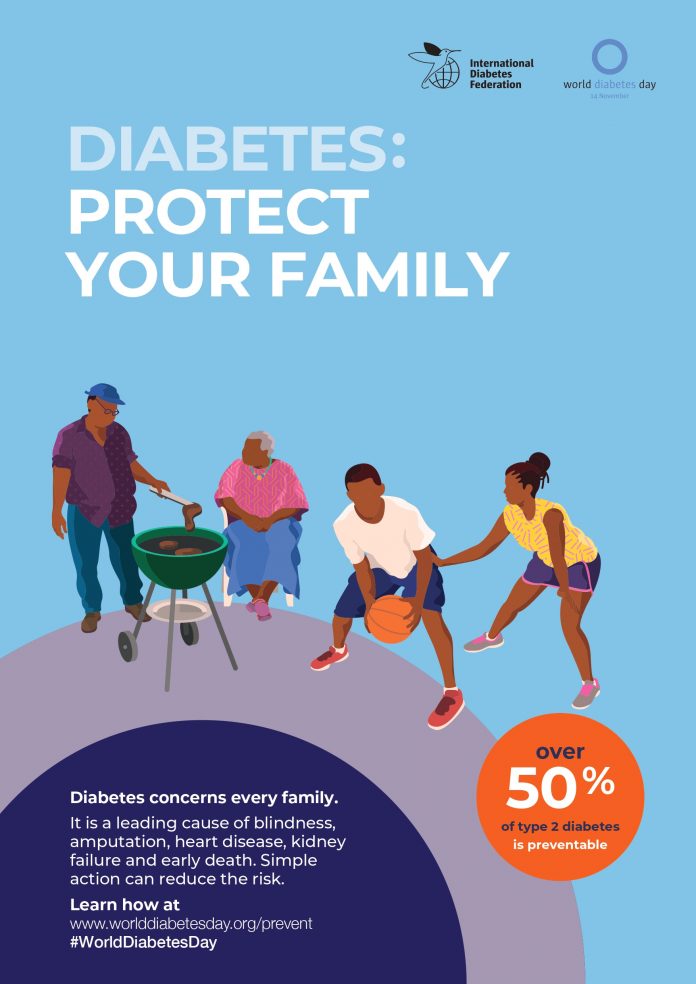 St. Kitts and Nevis joins the rest of the world in observance of World Diabetes Day (WDD) Thursday  as the St. Kitts Diabetes Association (SKDA) has declared the week of Nov. 10-17 as Diabetes Awareness Week under the global theme “Diabetes: Protect Your Family” in an effort to keep citizens abreast of the complications of diabetes and to promote healthy living.

“The decision of the St. Kitts Diabetes Association to have the observance of World Diabetes Day encased in a week of activities is certainly not accidental,” The Honourable Wendy Phipps, Senator and Minister of State in the Ministry of Health, said during her address on Sunday. “It is a well-established fact that diabetes is considered one of the major health problems included in the suite of illnesses that are called Non-Communicable Diseases (NCDs). Others in this cadre of illnesses include cancers, hypertension, heart disease and kidney disease. The World Health Organisation (WHO) has already determined that some 63% of global deaths are attributed to these NCDs. For us in St. Kitts and Nevis, the statistics are even more glaring: some 83% of all deaths in our Federation are due to NCDs.”

Diabetes Awareness Week opened with a church service at the Pro-Cathedral of Saint George in Basseterre on Sunday. Educational presentations in schools and a panel discussion on ZIZ TV and radio took place Nov. 11.

Other activities for the week include a Continued Medical Education (CME) programme at Joseph N France General Hospital on Wednesday; grand public health screening at Independence Square on Friday; and a Diabetes Awareness Walk on Saturday. The week culminates with the Annual General Meeting (AGM) of the association on Sunday.

“The choice of this theme by the WHO and the International Diabetes Foundation (IDF) is deliberately meant to continue their campaigns of previous years that have sought to showcase the impact of diabetes on families. This is certainly not surprising, given that the family is the building block of societies and nations. Moreover, diabetes has — along with all other NCDs — transcended health and has now become a socio-economic challenge that affects not just the persons being diagnosed with the condition, but also their families,” Minister Phipps commented regarding the theme for this years’ observance.

“The Ministry further encourages every citizen and resident of the Federation to get screened for diabetes by having regular medical checkups. It is also important that one manages diabetes once such a diagnosis is confirmed: prescription medication must be regularly taken, and dietary and lifestyle changes are an imperative. Attention must also be paid to foot care, in an effort to reduce the likelihood of nerve damage and amputations,” she said.

WDD is the world’s largest diabetes awareness campaign. It was introduced in 1991 by the International Diabetes Federation and the World Health Organization (WHO) in response to the alarming rise of diabetes around the world.

Audio of the Official Address in observance of Diabetes Awareness Week 2019 by the Honourable Wendy Phipps.

Eight-Year-Old English Boy Given Experimental Vaccine In Both Arms.