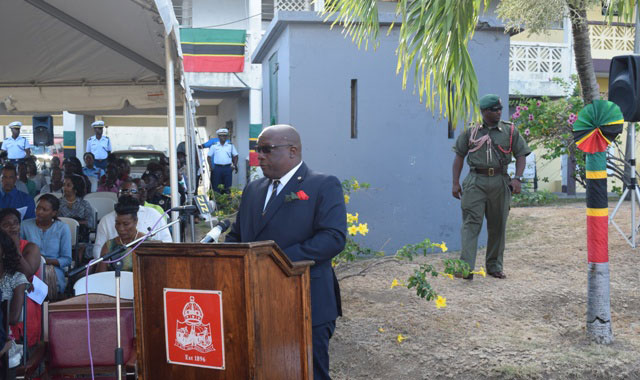 During his Feature Address, the Prime Minister made special mention of the two recruits who graduated at the top of their class.  Twenty-six-year-old Ms. Zonielle Maynard, who received the Best Overall Student Award, and 19-year-old Ms. Naeijah Dasent, who came second, were the only females to successfully complete the course.

“Today, I dare say that the back-to-back stellar results by women recruits in the St. Kitts and Nevis Defence Force signals a bellwether event for women in the security forces.  It demonstrates to them that by hard work, grit and determination, they can and they will rise to leadership positions in security and law enforcement.  Put this against the backdrop of the recent appointment of Ms. Merclyn Hughes as the first female Assistant Commissioner in the Royal St. Christopher and Nevis Police Force, and you add to that the first female Cabinet Secretary, Mrs. Josephine Huggins, and you add to that, too, the first female Press Secretary in the Office of the Prime Minister, Ms. Valencia Grant, and what results is a rosy picture of the future for women in this society in general.  The quality of access and upward mobility are important values for the Team Unity Administration,” Prime Minister Harris said.

Speaking of upward mobility, last year’s best performing student, Ms. Zenra Ferdinand, was promoted to the rank of Ensign.  She was the Master of Ceremony for yesterday’s passing out parade.

The Prime Minister praised two more recruits: 18-year-old Mr. Andrew Herbert, who was the best performing student in the physical fitness course, and Mr. Cajan Simmonds, who will celebrate his 19th birthday this Sunday.  Those two young men came from the New Horizons Juvenile Rehabilitation Centre and, even more noteworthy, they are the first two recruits to come directly from there, according to its Director, Ms. Adele Williams.

Prime Minister Harris said of the two young men, “Indeed, there are positive alternatives to delinquency that exist in our great country, and they are testament to this. I commend Recruits Herbert and Simmonds for finding the strength to overcome adversity.  They could have chosen to quit; however, despite their past challenges, they persevered and deserve our applause for their achievements.  When anyone asks, ‘Can anything good come from the New Horizons?,’ we can proudly say ‘Recruits Herbert and Simmonds are among those who did!’”

The New Horizons staff came to provide moral support to Mr. Herbert and Mr. Simmonds, who were part of the centre’s first intake cohort shortly after December 9th, 2013 when it began taking residents.

Seeing them march in the passing out parade was an emotional moment for the staff.  “It’s so overwhelming,” said Ms. Naeemah Hazelle, Deputy Director of New Horizons.

“I think that when people see them and the communities they came from, and the trouble they came from, it is really a testament to second chances – giving our young people a chance to achieve and giving them an opportunity to become productive citizens.  I think it is also a testament to the staff at New Horizons, as well as a testament to the children themselves and how much work and perseverance they really put into becoming productive citizens and giving back to the community that they once took from,” she added.

(Press release courtesy of the Office of the Press Secretary)