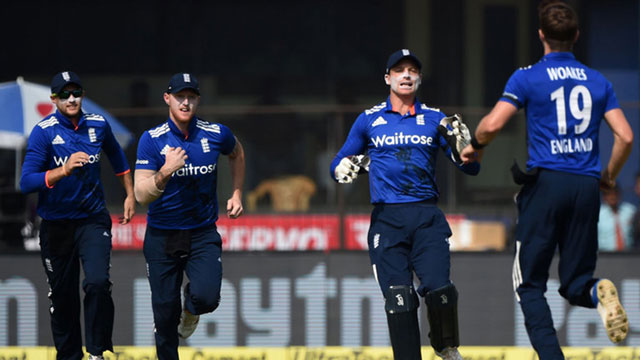 Basseterre, St. Kitts- Young cricketers from St. Kitts and Nevis are the beneficiaries of expertise from some of the world’s best English cricketers who took time to share their knowledge with the youths.

Batsmen Sam Billings and Jonny Bairstow and Bowling Coach Otis Gibson oversaw the session that featured some two dozen participants who are U15 at Warner Park.

The session was hosted by Waitrose, sponsor of the English Cricket team who were in St. Kitts preparing for a three match one day series versus West Indies later this week.

Jeremey Hall, sponsorship manager for Waitrose, gave an overview about the training session.

“It is a fantastic opportunity when the team tours to get connected with the local communities, and give some of the youngsters here and opportunity to spend some time with cricket professionals and hone their skills and learn from some of the best in the business,” he said.

He also spoke about the talent level among the young cricketers.

“After speaking with Johnny and Sam who were dealing with the kids, they have been very impressed with the talent that was on show. There are two or three guys here that stood out. And I think that there is a bright future for West Indies Cricket from what we have seen here today, and it is very, very strong,” he declared.

Mr. Hall said they have put on similar sessions in the past in other countries while on tour in the Caribbean, but due to time constraints they will only have it in St. Kitts this time around.

“We did this previously in Barbados but we only have the time to do it here in St. Kitts and we are taking full advantage of that,” he said.

As part of their preparation the English played two warm up games at Warner Park. On Saturday they thrashed a UWI Vice Chancellors XI despite 120 by Chadwick Walton.

The English batting first made and indomitable 380-8 from their 50 overs with Joe Roots 73 and captain Eoin Morgan’s 95 the stand out performances.

In response the UWI side could only muster 260 all out from 39.5 overs despite Walton’s century.

On Monday the English faced much sterner opposition in the WICB’s President’s XI and recorded a narrow two wicket win despite the English  having restricted them to 55-5 they went on to post 234 all out from 48.5 overs.

Jahmar Hamilton with 73 and Rahkeem Cornwall 59 shared 123-run stand for the sixth wicket as they rebuilt the innings for the home side.

However in response the English were looking comfortable at 128-1 in pursuit of their target, but slipped to 177-7 to set up a tight finish.

However a calm innings by All rounder Chris Woakes who added 47, saw the tourist to their target with seven balls to spear.

The top scorer for the English was Johnny Bairstow who scored 86 opening the innings.