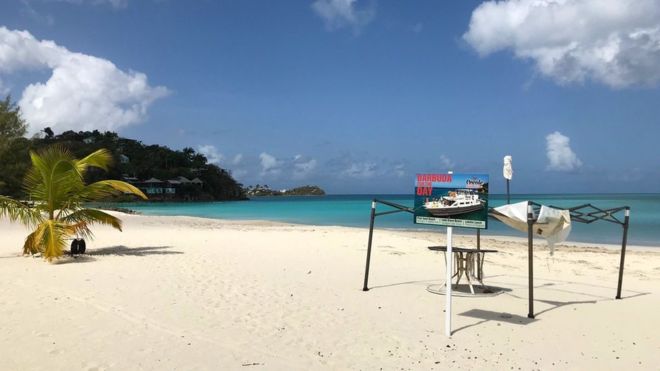 Seagulls are the only ones using the pool at a resort fringing one of Antigua’s most popular beaches.

They have the place all to themselves, save for a solitary security guard surveying the empty terrace usually abuzz with families.

Above, the bright blue sky is devoid of the aeroplanes ordinarily flitting back and forth with such regularity they are used to tell the time.

The absence of holidaymakers due to the Covid-19 pandemic is keenly felt on this Caribbean island for which, like many of its counterparts, tourism has long been its breadbasket.

Often dubbed the “most tourism-dependent region in the world”, the Caribbean attracted more than 31 million visitors last year. For some islands, the sector accounts to a colossal two-thirds of gross domestic product.

Antigua closed its borders to commercial flights in late March in an effort to contain the coronavirus.

It is especially galling after ploughing his life savings into a new boat for his Creole Antigua Tours company in October.

“My business is 100% dependent on tourists. We’re staying positive that things will pick up but I’m not seeing that happening until at least the end of the year,” he explains.

“If things don’t get better I’m really expecting to pack up. I know other small companies who feel the same.”

On 4 June the first commercial flight in 10 weeks will land in Antigua when American Airlines touches down from Miami. British Airways is set to follow suit in July.

Still, Aidan McCauley, owner of the Sugar Ridge resort, is expecting a “very soft season”. He hopes to reopen by November.

“We get 50% of our guests from the US and we believe that market will recover quicker, assuming Covid is contained. But is that likely? A second wave in the autumn would mean nobody will be able to come at all,” he says.

His plans include converting some of the hotel’s 60 suites to self-catering to alleviate travellers’ fears of virus transmission.

In St Lucia, the Anse Chastanet resort’s 540-strong workforce is down to just 35. The last guest left on 24 March.

With tourism the country’s main source of both jobs and income, the drop-off is “scary stuff”.

Furloughed staff are receiving income support through the country’s national insurance scheme but residents are acutely aware that the impact on government finances will be long-lasting.

“The government is being hammered because no-one has paid any taxes for the last couple of months. They were expecting a windfall in March from VAT as February is traditionally the strongest month,” Mr McKee explains.

“St Lucia is too well off for IMF assistance so where the funds will come from I don’t know. The virus itself has been pretty well contained but the economic fallout is terrifying,” he adds.

In Dominica, tourism keeps up to 5,000 of the island’s 72,000 inhabitants employed, says director of tourism Colin Piper.

The sector had already taken a hit from 2017’s devastating Hurricane Maria but visitors were fast returning to explore the country’s famous hot springs, rainforests and waterfalls.

Dominica’s healthy agricultural industry means it is less reliant on vacation dollars than many of its neighbours. Nonetheless, tourism contributes up to a third of GDP, Mr Piper says, with officials working hard to ensure the “sustainability of livelihoods”.

Many Caribbean nations are hedging their bets that people who have spent weeks cooped up on lockdowns across the world will be longing for a beach vacation.

What the islands have in their favour is relatively low numbers of virus cases. Earlier this month, University of West Indies researchers declared Covid-19 to be contained within the English-speaking Caribbean.

Now the region has the delicate balancing act of luring tourists back while ensuring both their safety and that of their citizens in tiny nations with limited health resources.

Bookings from prospective holidaymakers are still being received daily, but lack of confidence in local health facilities is still a deterrent for many, Mr Foss says.

“The key to welcoming the first plane appears to be for the ministry of health to increase the capacity of our hospitals, particularly the intensive care units. Until this occurs, we are unlikely to see any revenues for the industry,” he adds. 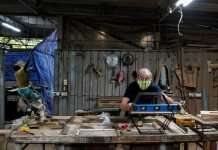