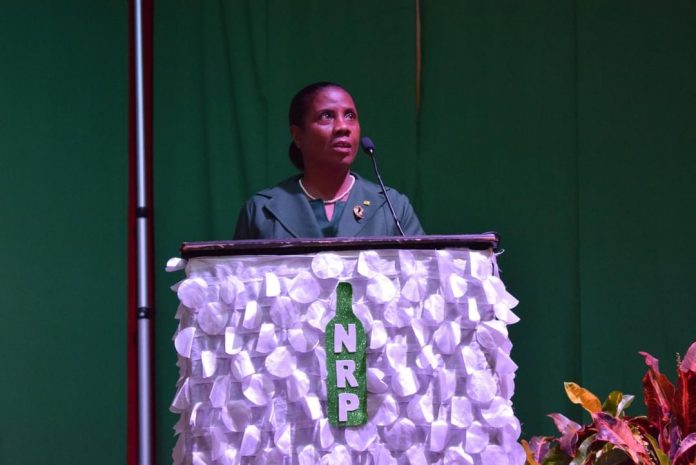 Fifty years after her father Sir Simeon Daniel founded the Nevis Reformation Party (NRP) and was its first leader, Dr. Janice Daniel-Hodge has been elected party leader and has promised to re-energize the party ahead of the next island election.

She said NRP will once again be ready to continue their work for the people of Nevis.

“NRP is rebuilding, we are reenergizing and we are growing stronger together with a sense of purpose.

She promised that her party will defeat the CCM party at the next local election due in two years.

“We will consolidate our efforts under one NRP we will be united in this campaign so that our stalwarts may be proud and know that their hard work may not go in vain.

“We will unite so that our children can have a brighter future in our beloved Nevis. We will unite and create a movement of historic proportions because we have only one option, one purpose, a clear vision to win the next election.”

Dr. Daniel Hodge said the party’s stalwarts must be proud because they have seen the party rebuilding and growing.

The new NRP leader said the party must be proud of its performance when it was in government and work to bring it back for the people.

She then declared her plans if she was successful t take the party back into office of the Nevis Island Administration.

“Under my leadership of this party, we will develop a sustainable economy around the green blue intellectual heritage economy framework to unlock a wealth of job creation, renewable energy, food security and bio diversity in conservation.

“Let us vow today that NRP will plant the seeds of peace, progress and prosperity and with hard work all of us let us watch Nevis blossom.”

Speaking at her election to the leader of the party Dr. Hodge Daniel said the party’s values allowed for her to be elected.

“The principles upon which this party was founded inclusivity, integrity, innovation, industry is the reason why I am here today and they reason why we are all here today.

“NRP was born out of decades of suffering and struggles and NRP had a vision for Nevis. Under its watch Nevis prospered, NRP laid a strong foundation for the development of Nevis.”

She said she was looking forward to working Stapleton-Simmonds to continue the party’s evolution.

“Hon. Cleone Stapleton-Simmonds, I am convinced that with your skill set to complement the ones that I bring to the table, NRP is in a great place. The change that NRP members have been asking for began with your victory at the polls to be the first female representative for St. Thomas’ also the first elected female representative of NRP. The wave of change through NRP continues today.”

Dr. Daniel-Hodge is an entrepreneur and environmental consultant who promote innovation and environmental sustainability in Small Island Developing States. She grew up and attended high school in Nevis, after which she earned a Bachelor’s Degree in Biology from St. Francis College in New York, a Master’s Degree in Microbiology from Alabama A&M University and a Doctoral Degree in Creative Leadership for Innovation and Change from the University of the Virgin Islands.